In Bay County there are over 40 different species of mosquitoes that have a wide range of habitats and flight ranges.

Each of the species has a scientific name that is Latin, such as Culex tarsalis. These names are used in a descriptive manner so that the name tells something about this particular mosquito. Some species have what are called "common names" as well as scientific names, such as Aedes albopictus, a.k.a., the Asian Tiger mosquito.

All mosquitoes must have water in which to complete their life cycle. They lay their eggs in such places as tree holes that periodically hold water, tide water pools in salt marshes, sewage effluent ponds, irrigated pastures, rain water ponds, etc. Each species therefore has unique environmental requirements for the maintenance of its life cycle.

The feeding habits of mosquitoes are quite unique in that only the adult females bite humans and other animals. The male mosquitoes feed only on plant juices. Some female mosquitoes prefer to feed on only one type of animal. Others feed on a variety of animals.

Most female mosquitoes have to feed on an animal in order to get a sufficient blood meal before she can develop eggs. If they do not get this blood meal, they will die without laying viable eggs. However, some species of mosquitoes have developed the means to lay viable eggs without getting a blood meal (Aedes taeniorhynchus, the black salt marsh mosquito).

The flight habits of mosquitoes depend again on the species with which we are dealing. Most domestic species remain fairly close to their point of origin while some species known for their migration habits are often an annoyance far from their breeding place. The flight range for females is usually longer than that of males. Many times wind is a factor in the dispersal or migration of mosquitoes. Most mosquitoes stay within a mile or two of their source. However, some have been recorded as far as 75 miles from their breeding source.

Culex mosquitoes lay their eggs on the surface of fresh or stagnant water. Mosquitoes prefer water sheltered from the wind by grass and weeds.

The water may be in: 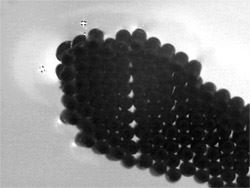 Culex mosquitoes usually lay their eggs at night. A mosquito may lay a raft of eggs every third night during its life span. They also lay their eggs one at a time, sticking them together to form a raft of from 200- 300 eggs. A raft of eggs looks like a speck of soot floating on the water and is about 1/4 inch long and 1/8 inch wide.

Tiny mosquito larvae emerge from the eggs within 24 hours. 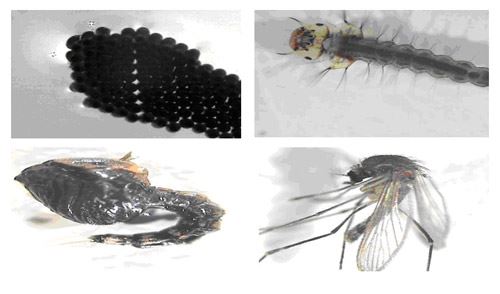 The mosquito goes through four separate and distinct stages of its life cycle which are as follows: egg, larva, pupa, and adult. Each of these stages can be easily recognized by their special appearance. There are four common groups of mosquitoes living in the Bay Area. They are Aedes, Anopheles, Culex, and Culiseta.

Larva: The larvae live in the water and come to the surface to breathe. They shed their skin four times growing larger after each molting. Most larvae have siphon tubes for breathing and hang from the water surface. Anopheles larvae do not have a siphon and they lie parallel to the water surface. The larvae feed on micro-organisms and organic matter in the water. On the fourth molt the larva changes into a pupa.

Pupa: The pupal stage is a resting, non-feeding stage. This is the time the mosquito turns into an adult. It takes about two days before the adult is fully developed. When development is complete, the pupal skin splits and the mosquito emerges as an adult.

Adult: The newly emerged adult rests on the surface of the water for a short time to allow itself to dry and all of its parts to harden. Also, the wings have to spread out and dry properly before it can fly.